Borrowing the Spanish word for “dinner,” CENAS is a transdisciplinary working group of scholars and artists developing, implementing and evaluating innovative approaches to healthy eating at the individual and community level, with arts practices at its center. Since 2012, CENAS has been involved with training, workshops, curriculum development, and research into the following questions: (1) Can the arts in general, and theatre-making in particular, empower individuals and communities to take charge of their health? (2) How does theatre-making relate to individual attitudinal and behavioral change? (3) What role does culture play in health? (4) Are the arts more effective in the long term than more traditional educational practices? Our research with young people and community health workers suggests that cooking together, combined with theatre-making activities, is linked positively to “I can do this” attitudes. We believe making theatre, more than merely watching it, is the key. We link the various components involved in making theatre together to factors identified by health scientists as necessary for attitudinal and behavioral change to occur. A growing body of research suggests the importance of culturally informed interventions in health promotion, yet most definitions of “culture” are pretty narrow. We are working to develop a more robust and nuanced accounting for cultural background as health asset, initially through embodied storytelling practices and theatre-making drawn from participants’ experiences of home cooking.

Rates of chronic disease related to the condition of obesity—among them cardiovascular disease, cancer, and type 2 diabetes—do not seem to have responded to fact-based messaging from public health offices. One result is an emergent attention to the integral role of culture in shaping disease and health, both medically and discursively (Fisher et al. 2007); another is the realization that no single discipline has the sufficient scope to encompass all of the factors that underlie complex, real-world problems. Hence transdisciplinary approaches are gaining popularity as a tool for understanding the underlying causes for health disparities in ethnic minority, and/or low-income populations.

However, the disciplines that collaborate together are usually complementary. A recent study of funded collaborations (Holmes et al. 2008) lists over 20 disciplines represented in transdisciplinary health disparities research, none would be considered to represent arts or humanities fields.

Intrigued by the prospects for bringing the arts and humanities to bear on a health problem as complexly socio-cultural as it is medical, in January of 2012 a team of researchers from various disciplines in theatre, humanities, and health sciences at Arizona State University (ASU) commissioned a three-week residency with performing artist and chef Robert Farid Karimi.

The team built a research project around the residency to explore whether a combination of cooking classes and theatre workshops could do for diabetes education and prevention what other programs of health education so far have not—specifically, to lay the groundwork for long-term dietary change—in a measurably significant way. We worked with a community in South Phoenix, home to a diverse population of lower income Latino and African American families, which is arguably a food desert or swamp enucleated within a larger urban candy store of enormous food variety. There, rates of chronic, obesity-related diseases are higher than average in the state and nation (Szkupinski Quiroga & Glick 2012). Karimi conducted three weeks’ worth of cooking and theatre workshops with high school students, ASU college students in allied health areas, and promotoras – community promoters of health from South Phoenix.

Although numerous studies have advocated for a transdisciplinary approach to understanding risk factors for health disparities in ethnic minority and low-income populations, and to designing interventions to mitigate these risks, few have included, much less meaningfully integrated, the disciplines of the humanities and the arts (Halbert et al. 2012). Within the current research group (comprising an anthropologist, a theatre historian, a theatre artist, and 2 health interventionists from nursing), we welcomed the opportunity to expand our knowledge base and to challenge our preconceived notions. We have grown individually and as a team by having to remain open minded while theorizing from a broad, contextually oriented approach that is inclusive of different disciplinary views; we have had to adapt to cognitive shifts in paradigms and be willing to consider all perspectives with open dialogue. 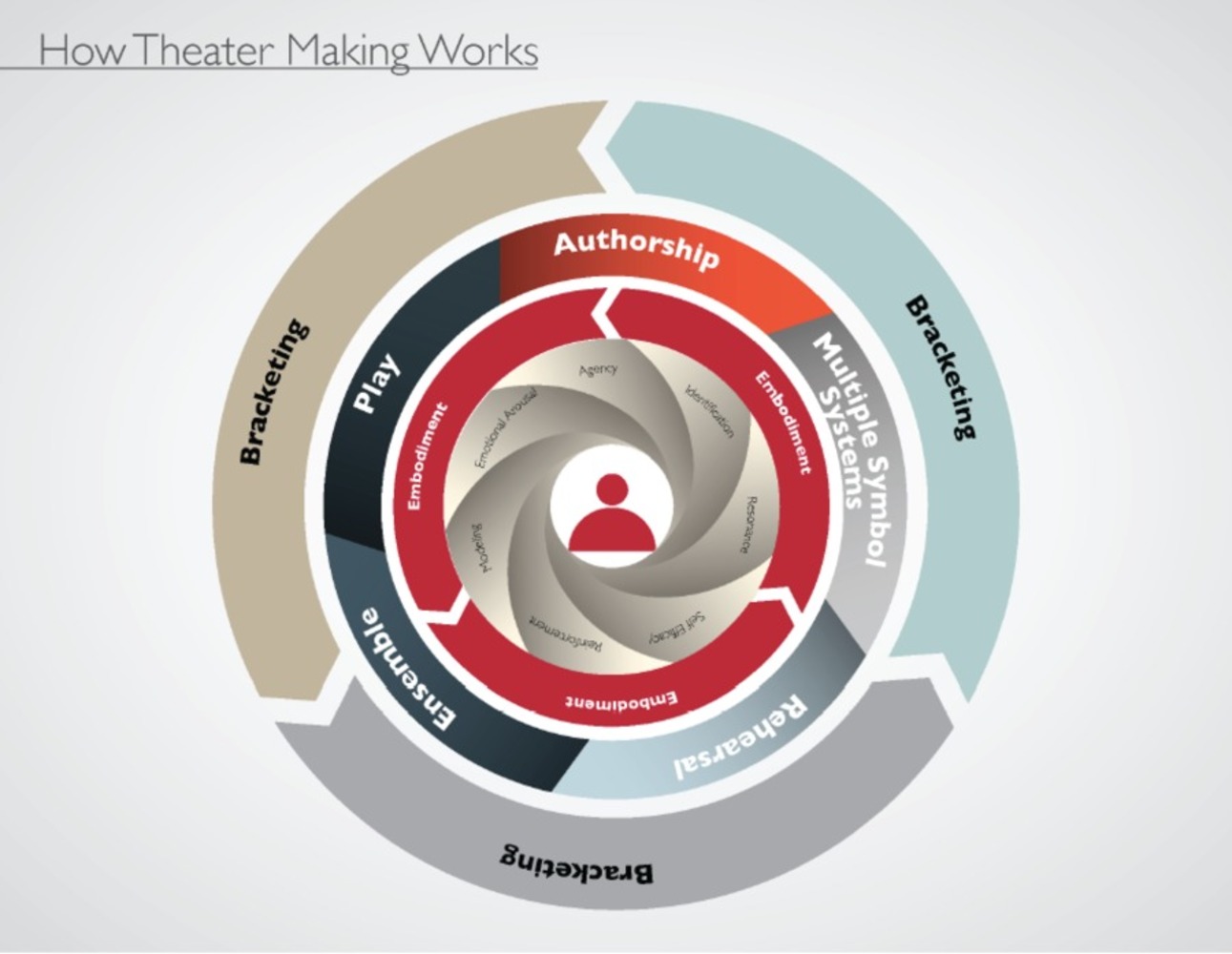 Among our discoveries: first, that the arts can in fact make an “intervention” into health behaviors and attitudes, at least in the short term; positive changes were noted in both categories across all of our participants, although the precise mechanisms by which change occurs requires further study. For that reason, we developed a second NSF-sponsored study, designed to reveal more precisely if there are in fact links between various aspects of theatre-making, and factors identified in the health literature as intermediary to behavioral change.

Quantitative measures were administered in English to all participants at both study sites on the first visit and again at the end of the workshops; they included the following:

Qualitative Assessment was undertaken between three and five weeks after the final workshop meeting, through interviews with participants individually, in pairs, or in peer groups. The length of the interviews ranged from 45 minutes to an hour and a half. We asked open-ended questions about what they most remembered, what they learned, what they liked and did not like about the workshops, how their learning transferred to other areas of their lives, how they shared their learning with family, friends and community members, the role of theatre and storytelling in their experience, and their suggestions for future workshops.

This project is supported by a National Endowment for the Arts ART WORKS grant (#15-3800-7016), as well as support from the Performance in the Borderlands project and the Institute for Humanities Research at Arizona State University.

As early groundwork for Ground Works, a2ru invited submissions of interdisciplinary projects--especially those crossing science, engineering, art, and design--to its 2015 conference. Six of those projects were selected, presented, and given guided critique sessions that were meant to establish an understanding of the review of such projects. This process, and all six projects, played a seminal role in shaping the platform and helping to define the a2ru transdisciplinary space.

When the Ground Works platform was created, A2RU partner and Ground Works co-founder Kevin Hamilton assembled the materials for CENAS (one of those six projects) and crafted an exemplar of the type of arts-integrative, interdisciplinary work the platform seeks. This exemplar is now included on the Ground Works Journal page.

While the other five projects have not been similarly shaped into the Ground Works online format, we encourage readers to view these extraordinary arts-integrative projects via the following links….